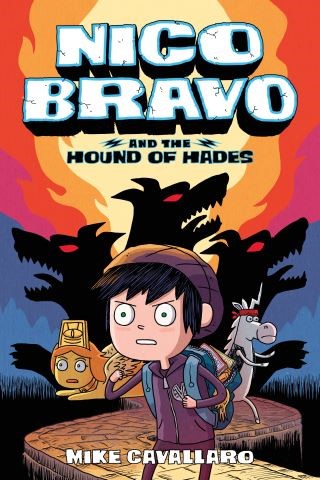 Nico Bravo and the Hound of Hades

Take another look at your favorite myths and legends in this hillarious new graphic novel by Mike Cavallaro!

Got a problem? At Vulcan’s Celestial Supply Shop, you can find the magical merchandise to set things right. The seasoned staff—a kid named Nico Bravo, a sphinx named Lula, and a unicorn named Buck—pride themselves on providing “legendary service and expertise in all areas of the arcane.”

But Nico’s world is about to be turned upside down, and it’s all thanks his latest customer: Eowulf, the pint-size descendant of the monster slayer Beowulf. Determined to carry on the family business, this would-be warrior plans to slay Cerberus, the terrifying, three-headed hound of Hades. There’s just one problem—Cerberus is the only thing preventing the hordes of the Underworld from entering the land of the living. Can Nico stop Eowulf from unleashing a zombie apocalypse?

Mike Cavallaro: Mike Cavallaro is from New Jersey and has worked in comics and animation since the early 1990s. His comics include Eisner Award–nominated Parade (with Fireworks), The Life and Times of Savior 28 (written by J. M. DeMatteis), Foiled and Curses! Foiled Again (written by Jane Yolen), and Decelerate Blue (written by Adam Rapp).