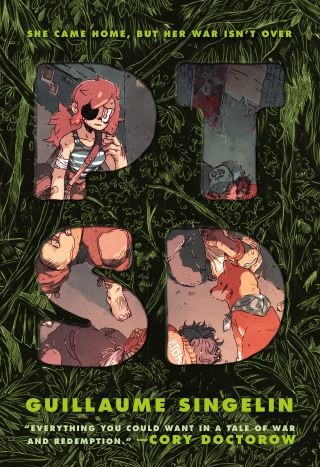 After returning home from an unpopular war, Jun becomes an outsider in an indifferent world. Alone, desperate, and suffering from wounds both mental and physical, she seeks relief in the illicit drugs she manages to purchase or steal. Jun’s tough exterior served her well in combat, but she’ll need to nurture her vulnerability and humanity to survive at home. With the support of her fellow vets, the kindness of a stranger who refuses to turn away, and the companionship of a dog named Red, Jun learns to navigate the psychological trauma that she experienced in the war. Singelin's PTSD is an adult fiction graphic novel that grapples with the reality of being a war veteran about a traumatized war vet who must fend for herself against all odds.