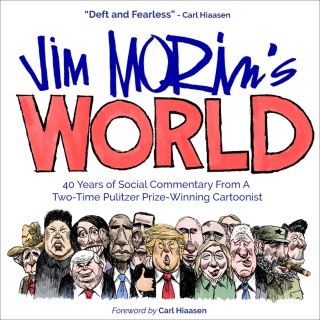 The best editorial cartoons from the Miami Herald’s Jim Morin, “one of the great under-appreciated cartoonists of the last quarter century” (The Comics Reporter).

Political cartoonists distill opinions about power and culture into art and commentary with the sharp points of their pens Most recently, during and after Election 2016, the remarkable artist’s pen of Jim Morin has produced a steady stream of Donald Trump cartoons that have both delighted and infuriated followers, depending upon their side of the Donald Trump divide. This book of best cartoons by Jim Morin is both funny and poignant. It is a nostalgic journey through the last forty years of the comedy and reality of our world.

Upon awarding the prestigious Herblock Prize to Jim Morin in 2007, Harry Katz, the Herb Block Foundation curator, praised this two-time Pulitzer Prize winner for his “impressive, unrelenting barrage of cartoons and caricatures displaying artistry, courage and conviction.” Morin should also be praised for his wit and timely wry sense of humor, which has been a staple of the Miami Herald since 1978. Jim Morin’s World: 40 Years of Social Commentary From A Two-Time Pulitzer Prize–Winning Cartoonist is a collection of some of the best cartoons by this gifted artist and commentator on our times.

“We’re lucky to have one of the very best, waiting with pen in hand to carve up the phonies, blowhards, crooks and hypocrites who make headlines. They might not want to end up in a Jim Morin cartoon, but they will.” —Carl Hiaasen, from the foreword

Carl Hiaasen:
Carl Hiaasen (b. 1953) is the New York Times bestselling and award-winning author of more than twenty adult and young adult novels and nonfiction titles, including the novels Strip Tease (1993) and Skinny Dip (2004), as well as the mystery-thrillers Powder Burn (1981), Trap Line (1982), and A Death in China (1984), which were cowritten with fellow Miami Herald journalist Bill Montalbano (1941–1998). Hiaasen is best known for his satirical writing and dark humor, much of which is directed at various social and political issues in his home state of Florida. He is an award-winning columnist for the Miami Herald, and lives in Vero Beach.