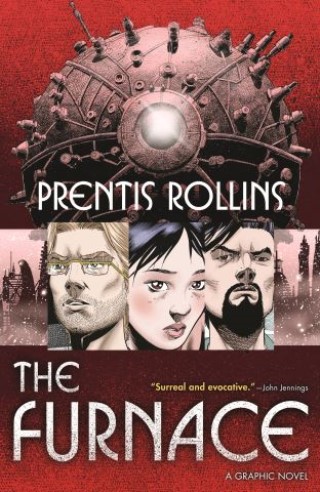 Timely and heartfelt, Prentis Rollins’s graphic novel debut The Furnace is a literary science fiction glimpse into our future, for fans of Black Mirror and The Twilight Zone

One decision. Thousands of lives ruined. Can someone ever repent for the sins of their past?

When Professor Walton Honderich was a young grad student, he participated in a government prison program and committed an act that led to the death of his friend, the brilliant physicist Marc Lepore, and resulted in unimaginable torment for an entire class of people across the United States.

Twenty years later, now an insecure father slipping into alcoholism, Walton struggles against the ghosts that haunt him in a futuristic New York City.

With full-color art and a cutting-edge critique of our increasingly technological world, The Furnace speaks fluently to the terrifying scope of the surveillance state, the dangerous allure of legacy, and the hope of redemption despite our flaws.

“Surreal and evocative, The Furnace is a great critique of technology and the human condition.” —John Jennings, illustrator for the New York Times #1 bestseller Octavia Butler’s Kindred: A Graphic Novel Adaptation

At the Publisher's request, this title is being sold without Digital Rights Management Software (DRM) applied.

Prentis Rollins: PRENTIS ROLLINS has over 20 years of experience working as a writer and artist in the comics industry. His previous titles include How to Draw Sci-fi Utopias and Dystopias, The Making of a Graphic Novel, and Survival Machine (Stories). He has also worked for DC Comics between 1993-2013 for titles such as Batman, Superman, Green Lantern, JLA, and dozens more. The Furnace is his debut full-length graphic novel. He lives in London with his wife and three children.