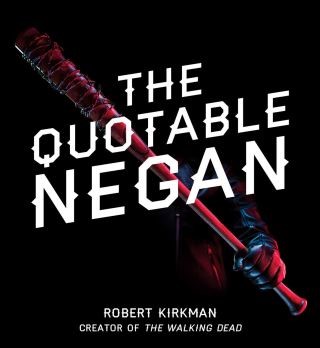 This collection of quotes, trivia, and exclusive behind-the-scenes material, focused on everyone’s favorite bad guy—the violent, foul-mouthed, and charismatic psychopath Negan—is an essential guide for all fans of both the AMC television show The Walking Dead and the original comic book series.

The Walking Dead is a cultural phenomenon that has infected the minds of zombie-loving fans worldwide. Whether you’re familiar with the hit television show, the comic book series, or both, one of the most memorable characters is Negan—the barbed-wire baseball-bat-wielding leader of the Saviors. Now, in The Quotable Negan, you can discover fun and fascinating trivia, his most bad-ass quotable moments, and much more. This is the perfect gift for any fan of The Walking Dead’s most infamous villain.

Robert Kirkman: First and foremost a comic creator, Robert Kirkman has seen groundbreaking success in the adaptation of his comic book titles into major franchises in all forms of content, including The Walking Dead, Outcast, Invincible, and Super Dinosaur. In 2010, his Eisner Award-winning series, The Walking Dead, was developed into an AMC television series, before going on to become a worldwide phenomenon. Beyond the comic world, Kirkman serves as creator, writer, and executive producer of several television shows including Robert Kirkman’s Secret History of Comics and Outcast, which is based on his popular comic book series. He lives in Los Angeles with his awesome wife and children.