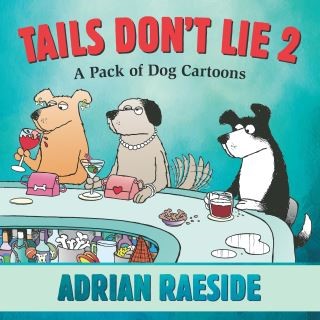 A Pack of Dog Cartoons

A dog’s tail is incredibly versatile. They use them to communicate everything from the furious, full-body wiggling “I’m so happy to see you I could burst!” to the tucked-under-the-bum “N-O-O-O! Is that the vet’s office we’re pulling up to?” They also keep noses warm on cold nights and conveniently sweep food off coffee tables. Tails Don’t Lie 2 is Adrian Raeside’s hilarious follow-up to the bestselling Tails Don’t Lie (Harbour, 2013), collecting even more of his favourite cartoons featuring our four-legged hairy scroungers. This new volume explores important canine traits like why dogs covet the driver’s seat, what would happen if dogs went on space missions (do aliens have dogs?), the humiliation of tail docking, the immense importance of trees to a dog, and the eternal question of why squirrel-chasing isn’t included in dog agility courses. Containing 340 full-colour cartoons, Tails Don’t Lie 2 offers a unique window into the mind of the family pet that will have readers howling.